Stay out of the rain and come join us here at Salt tomorrow. We start the day off with THE FIGHTING IRISH taking on the San Diego State Aztecs at 3:30.

then at 7:00 its the US OPEN Womens Finals

then at 10:00 its Pie Boys Flat...a great NYC band bringing their "Sublime" influenced reggae/ska....other influences are Jack Johnson, Bob Marley...you get the idea....come check em out. No Cover!

And Tony has nailed it with the new "Blazin' Berry Barbecue Wings" at the bar. With our test run last night, the feedback was....Best Wings Ever!!!!

And have one of Jim's "Tropical Storm" cocktail.....Black cherry rum, OJ, and Sprite.


Pete's Wicked is truly a unique beer experience. Reward yourself with our golden lager made of the finest pale and wheat malts and Cluster Hops, with a kiss of natural strawberry flavor.

Lion Brewing "Pocono Lager"
Pocono Lager is brewed with a blend of the finest American malts to create a brew with an inviting color and drinkability. Super creamy head, the way a really great lager should be. Take a sip and savor the rich flavor and exquisite body! 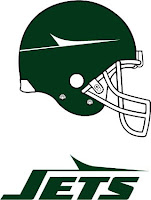 Starting Thursday Night at 7:00pm...Its the opening night of the NFL and featuring the World Champion NJ Giants vs. Washington Redskins. Cmon in and cheer or jeer, drink some 2.50 draft McSorley's eat some of Tony's home-made "hot-as-hell" wings for 3.00 a dozen and just enjoy the game!

Saturday 3:30pm is the opening game for the "NOTRE DAME FIGHTING IRISH" v SanDiego State Aztecs, in the stadium that God built....come watch the Irish start off a 1-0 season......SD State, cmon give me a break!!

Saturday 7:00pm is the Women's US OPEN Finals from Arthur Ashe Stadium!

Sunday @ 12:00pm is the Mens US OPEN Finals, come see if Roger Federer can make history by winning 5 in a row!!!

Sunday @ 1:00pm come and see that "Whiner From The West" Brett Favre and the rest of the lowly Jets take on the Miami Dolphins and the "Comeback Kid" Chad Pennington (who will take last years 0-11 dolphins to sweet victory) down in sunny Miami.

Thats quite a line-up for the week! 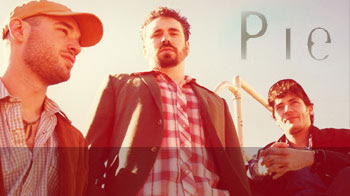 Pie Boys Flat hit the NYC music scene in 2003 with their unique blend of Reggae, Blues, and Funk. Their writing shows influences ranging from Bob Marley to Jack Johnson to Sublime to Paul Simon and has melded into a form of ethnic Rhythm and Blues that sits firmly in the pocket of a style all its own. Laced with soaring three-part harmonies, their music is the manifestation of a many year friendship and collective musical intuition. Patrick Hambrick (Guitar/Vocals), Fitz Harris (Percussion/Vocals), and Jason Liles (Bass/Vocals) met in the late 1990’s at Shenandoah Conservatory in Virginia, where the trio formed a bond that is now apparent in both their writing and performing.

Pie Boys Flat started out playing arrangements of their 5-hour cover-tune repertoire on the subway platforms of NYC. They have gone on to book regular dates at Mo Pitkens, CBs Gallery, The Bitter End, The Cutting Room, Suite 16, Lounge 32, Tailors Hall, Gibneys, The Pig ‘n’ Whistle, and build a dedicated following throughout the five boroughs. In addition, PBF has been hired for reoccurring, guest-artist appearances at venues up and down the east coast including their alma mater, Shenandoah Conservatory.

In 2004, Pie Boys Flat was commissioned by Globe Entertainment for a four-month tour through the Greek Isles with an extended stay on the isle of Kos. Playing 3 hours a night, 7 nights a week for the full duration of their tour, PBF sold over 800 copies of their first LP, Come Taste the Pie, to tourists from all over Western Europe, Scandinavia, Australia, and many Middle-Eastern countries.

Upon their return to the states, PBF once again teamed up with their friend and Grammy-nominated producer, Tommy Faragher, to produce their second LP, Post No Bills. Through NYC club/internet promotion, the all-original, twelve-song CD sold by the hundreds across the U.S. and Europe.

In 2005, PBF joined NACA and launched their first college/club tour of the eastern United States, taking them as far north as Canandaigua, NY and as far south as Laurinburg, NC. Over the course of their 4 1/2 months on the road, the Pie Boys found two weeks to team up with friend and new producer Sean Moffitt to record their first full-lenth, full-scale album Uproot The Island. The album was released June 3, 2006 at ULYSSES in downtown, Manhattan and is currently on sale at pieboysflat.com, CDbaby.com, or at any live PBF show.

With the release of their new album, Pie Boys Flat is gearing up for a very busy and exciting 2006/07. They have once again joined NACA, been selected to showcase live at 3 regional conferences (Mid-Atlantic - Lancaster, PA, Northeast - Marlborough, MA, Mid-America - Peoria, IL), and have already begun booking dates for what is shaping up to be a packed U.S. tour beginning in September 2006.

As always, Pie Boys Flat remains steeped in rootsy, southern grooves and rich, soaring vocals so, whether a seasoned veteran or a new-found fan, make sure to catch PBF in 2006/07 because this explosively high-energy trio has only begun to flourish. 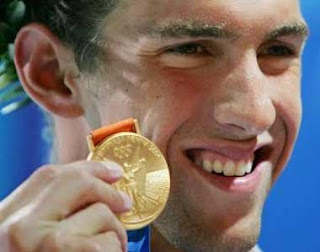 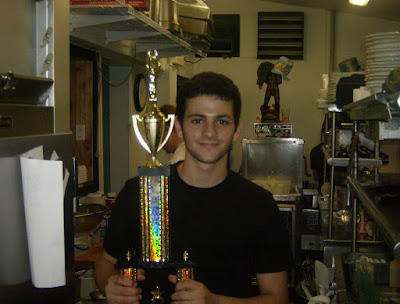 Phelps did "Good" but David O'Conner is THE MAN!! First of all look at that trophy compared to that puny medal. And let's also remember, David has to defend his title EVERY YEAR, Phelps only has to every 4 years. David trained hard, and it showed on game day, downing 8 hot dogs and buns in 7 mins in the "1st Annual Salty Dawg Labor Day Weekend Hot Dog Eating Contest". Here he is proudly displaying his trophy after the contest, walking it around Salt with his chest all puffed out, showing it off to the kitchen staff and rubbing it in the faces of all of the other "Scarfers". We thank everyone who came out to participate as well as those that came just to watch and cheer them all on...A fun time was had by all! Also thanks to Local Radio Station 91.9 WNTI for coming out and MCing for us. Mark your calenders for next year...Labor Day Weekend!!!

We also want to thank the Mayor and Council and other members of the Byram Township Municipal Offices for coming out and joining us for our "Grand Opening"....This really is a great town not just to live in, but to do business in....So thanks to them for welcoming us to the town!! 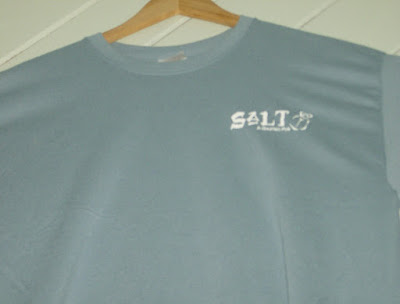 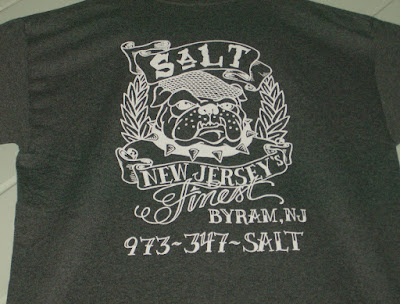 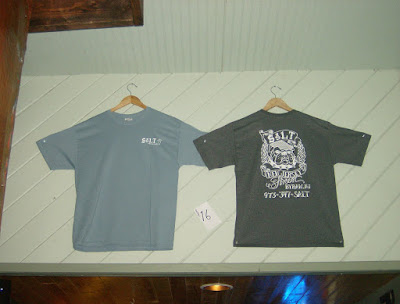 You guy's (well maybe not ALL of you guys, but alot) have been asking when we will be getting T-Shirts made.....Well here they are! A huge shout out to Mr. Eric Hornung who is behind the bulldog logo, and designing the backs of our shirts. (Eric can be checked out at www.tatooedangler.blogspot.com ) we love it! Ralph will forever be on the backs of our staff and many friends! Shirts can be purchased in all sizes here at Salt anytime for 16.00. Right now we have a "Heathered Gray" and "Light Blue". Wear them proudly, and with a little bit of attitude!