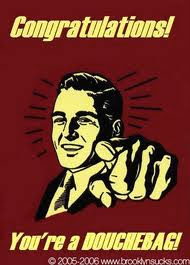 Ok....so lets say you buy tickets to a show, a show at, I don't know, maybe like a local gastropub. You know, like a place where there is alcohol served, it can tend to be loud, probably pretty crowded, no guarantee that you will get a seat, needs to be quiet during the performance. Picturing it? Ok, so you call this "gastropub" at around 5:30 on the night of the show and want to know if it is ok to bring your infant,(??????) which is a pretty normal question to ask 3 hours before a show is going to start at a place that is loud, crowded, serving alcohol and has a show starting at 8:30pm and probably won't be over until around 11pm. Now the person on the other end of the phone, lets call her "Manager Jen", just for shits and giggles......"Manager Jen" puts you on hold for quite some time, like at least, I don't know, lets just say 6-8 seconds, obviously conferring with someone, like an owner or some other person who thinks they are important and can make decisions. When "Manager Jen" finally gets back on the phone she, and this is what floors me, has the nerve to say "No, its not really an atmosphere for an infant"....so even though you are probably beyond pissed at having someone tell you what is or isn't appropriate for your infant, who is probably a musical prodigy and would really take in the evening, you say "OK, thank you". Now you probably get to thinking, and think it would be a great idea to call back and tell "Manager Jen" that you want your money back on the 4 tix that you bought for the show. Reasonable right? Because you can probably recall that time you had tix for Bruce at the Meadowlands back in '92 and you got a bad case of the runs from partying too hard the night before while watching MTV and playing a wicked game of quarters with your buddies and couldn't make it to the show and you called "Manager Louie" at the Meadowlands, told him you had the runs and wanted your money back, and "Manager Louie" said "of course, no problem, so sorry you couldn't make it". So this "gastropub" which is a tiny little place, and probably has no overhead, and I am sure that the artists that play there play for free since it is so small, and the staff all work for free because this place is probably a blast just being there So when you are told, sorry the tix are non-refundable, but what we can do for you is try to sell them at the door for you, but there is no guarantee" by "Manager Jen" of course the only logical response is to blow a gasket, tell "Manager Jen" in a loud and threatening manner "That is Fucking Bullshit" and that you are going to come there and get your tix and stand outside and sell them, and ask her "what are you going to do then?" Then when she doesn't really know what to say, hit her with the good ole stand-by line of "It doesn't say anywhere on your web-site that infants aren't allowed"...that will get her. As a matter of fact it doesn't even say on the web-site no hand grenades, no terrorists or no crapping in the middle of the floor during shows either, so this gets you thinking......but thats getting off track right now. So anyway, moral of this story is that if you don't do the responsible thing as a parent, and get a babysitter for the evening that you had planned to go out to see a show that starts at 8:30 at night in a place that had the word "PUB" in its name, will probably be loud and crowded and serves lots of alcohol to adults.....don't call me with your pisspoor attitude, yell at my manager over the phone, act like a total tool and just be an all - around douche bag. Chances are that even though I would have to take a hit on the tix I probably would have gone out of my way to try and accomodate you...but you know what now...FUCK YOU! Oh yea, and you missed a really really good show!
Posted by salt at 2:55 PM No comments: